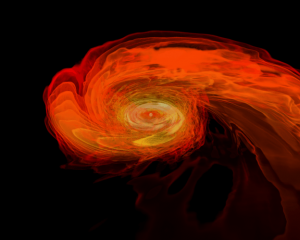 The time-varying behaviour of accretion flows is responsible for a large amount of observational evidence from compact objects, either black holes or neutron stars. This topic has attracted a lot of interest in the last few years, in connection with several fundamental physical effects taking place in accretion discs, such as the development of the magneto-rotational instability, the transport of angular momentum through magnetic turbulence, the time evolution of magnetohydrodynamic warps or the excitation of various kinds of oscillation modes and waves. Recently, we have investigated the response of a non-Keplerian circumbinary discs that responds to the loss of mass and to the recoil velocity of the black hole produced after the merger of two supermassive black holes.