Black holes are the most extreme objects predicted by Einstein’s relativity, enveloped in an event horizon and producing large distortions in the surrounding spacetime. These distortions are of particular current interest, because in dynamical situations (such as oscillating or orbiting black holes) they result in propagating gravitational waves. Inspiralling black holes are the strongest potential signal source of gravitational waves to be detected by ground-based interferometers, such as LIGO, GEO600 and Virgo 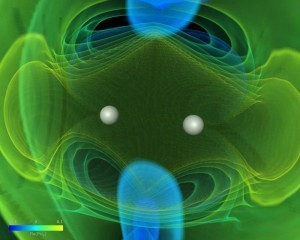 . It is important to have accurate models of such inspirals for both the detection, and also the understanding, of the signals from these detectors.

Our work is focussed on understanding the dynamics of black holes through computer simulation of binary inspirals. This involves studying horizon dynamics and extracting gravitational wave information from physically realistic models. 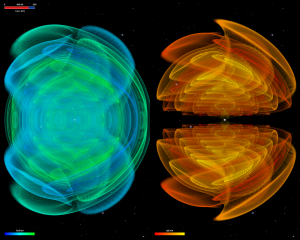