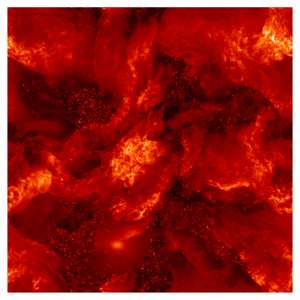 Relativistic hydrodynamics and magnetohydynamics represent an incredibly successful framework to describe the dynamics of matter from scales as small as those of colliding elementary particles, up to the largest scales in the universe. This general framework is constructed around the concept of a fluid as a system whose large-scale properties can be described effectively without having to worry about the features that the constituent elements have at much smaller length-scales.  This elementary framework can be used to describe with remarkable precision what we observe, for instance, when colliding two heavy ions moving at near the speed of light, when studying venous hemodynamics or racing sailing boats, or even when explaining the most catastrophic events from the remote corners of the universe.

Whether “applied” to a specific astrophysical problem, e.g. when studying the properties of neutron stars, or when “pure”, e.g., when studying the dynamics of nonlinear waves and turbulence, relativistic hydrodynamics represents an incredible arena of physics and mathematics.