In December 2013 a team composed by  Heino Falcke, Radboud University Nijmegen, Michael Kramer, Max-Planck-Institut für Radioastronomie, and myself (see photo) has been awarded a Synergy Grant from the European Research Council (ERC). These grants represent the most prestigious and substantial form of funding in Europe and for the first time they have been awarded for an astrophysics proposal. More information can be found 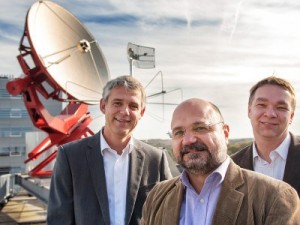 The project hopes to measure the shadow cast by the event horizon of the black hole in the center of the Milky Way, find new radio pulsars near this black hole, and combine these measurements with advanced computer simulations of the behaviour of light and matter around black holes as predicted by theories of gravity. They will combine several telescopes around the globe to peer into the heart of our own Galaxy, which hosts a mysterious radio source, called Sagittarius A* and which is considered to be the central supermassive black hole.

In this page I collect information about this project and the progress that it is making.